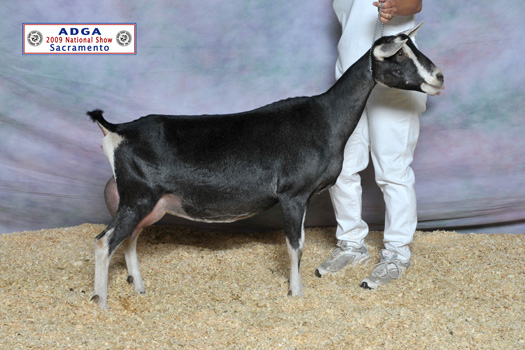 Holy cow, did our little Pensive ever grow up!  Though she was not the biggest yearling in the barn, Pensive just has that certain *something* that makes her stand out.  One of our first Aragon daughters to freshen, she hasn't disappointed.  She excels in her depth of body, and overall width.  Her top ten placing at nationals was the icing on the cake for her yearling career.
Though she is the barn "goof" she is all business in the milkroom.  She is projected at #3530 as a yearling!


January 2011-  Wow, did Pensive ever put it into the bucket this year.  Over 4000# as a 2 yr old!!!!  She did have a slowdown in production after breeding, but then held steady again.  Pensive has the interesting trait of being one of the shorter statured does in the barn, yet throws the largest kids.  Her 2010 daughter Prada, is already as large as the 2nd freshening 2 yr olds!   Pensive is bred to our new junior herdsire Barbwire RHSS Achievement.  I expect this cross to tighten up Pensive's massive mammary system.

Dec 2011-  Pensive just continues to fill the bucket -- we probably should have kept on milking this year, as she was projected at over #5000, but the owners were in desperate need of a break!   She finished off the year with a record of 276-4250-150-119!  You cannot say this girl doesn't work!!!
Although a moderate size herself, Pensive has the interesting ability to throw the largest kids in the herd - as evidenced by her yearling milker, Prada.   (We unfortunately lost her HUGE yearling daughter Zenith )

2012 - Pensive is a powerhouse of a milker.  We are pushing for a full lactation this year, as she is already at 4170# at 254 days.  She just keeps going!  This is one of those rare does that always produces daughters *better* than herself.  Her daughter Prada scored an impressive 90 EEEE at appraisal this year, and her daughter Chanel Noir out of Speed promises to be something special as wells.  We were pleased that her 2012 appraisal scores also more correctly reflects her true appearance.  Bred to Maxime's son, Maximum Velocity - these kids should be HUGE and MILKY!

2013- Pensive turned in a stellar performance milking last year, making the Top Ten list in all three categories!   Her record of 3-10-305-4820-17-124 put her at #5 for milk, #2 for butterfat, and #10 for protein.  Since we had to take her to the fair to get her verification test this year, she promptly wowed us by winning her class while completely milked out!  She is still a ham, and all it takes to get her to come running is a wave of a banana peel!