(These animals are either deceased, have been sold, or are no long breeding) 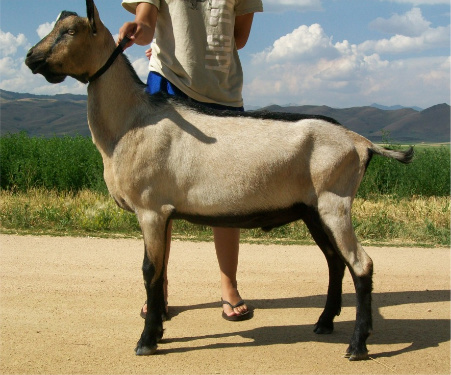 
I fell in love with Nyeri's dam Nakuru in the Pearl Valley herd early on - unfortunately, she died right after kidding as a 2 yr old, and we never got to see her full potential.   On his sire's side, he is a paternal grandson of the beautiful Sebastienne. With his impressive pedigree, I am very pleased to have had the opportunity to add Nyeri to the herd.  Nyeri is super long and stretchy, with excellent feet and legs.  We have used him on a large number of does and hopefully we will get a good number of doelings to evaluate. 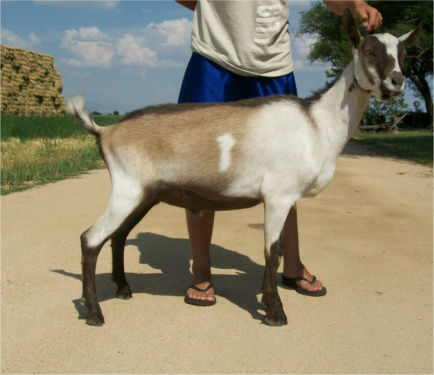 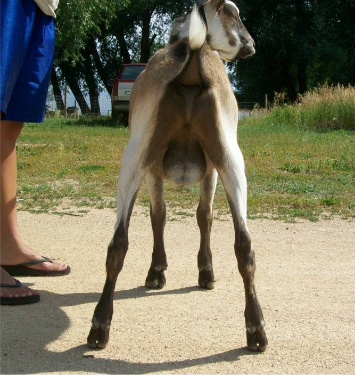 Sometimes you find something special you didn't even know you were looking for!  While visiting the Barbwire herd this summer, "Archie's" dam caught my eye -- as a 10 year old doe, she looks absolutely amazing, with an incredibly high and tight mammary system.   When I saw her son from X ( himself a son of the gorgeous Sass)  in the kid pen -- wide, correct and *lavender* well, I had to bring him home!   Archie has been used on a number of different does, and we're looking forward to seeing what he can do for us.

Dedza is an incredibly stylish doe who just exudes grace and type as she moves.  She was kept at home this year in order to make room to show our younger stock.

2006- Dedza finished her championship, going Grand and BOB in both rings at the Ogden, Utah show.


Madam came home with us as a companion for Snowbird.  Though she is a big, correct, stylish doe, she freshened slightly lopsided this year, and so was kept home off of the show string.  She is a lovely milker nonetheless, and has peaked at #13 this year.   Her udder is very nicely shaped, with well-placed teats.

Baxter has been a joy to own.  He is incredibly easy to handle and has a wonderful personality.  We were thrilled when he easily won his championship as a yearling at the District VII Specialty in 2005, also going Best of Breed in all three rings.  He stands on extremely correct feet and legs and has extreme size and style, which he passes to his offspring.  Pictured here as a 2 yr old, in full rut

In 2006, his Linear Appraisal score came in as 90 EEV!  He scored excellent in Head, Rear legs, Back and Rump, and 50 in stature!  Two of his yearling daughters scored E mammaries!.

This is Baxter's litermate sister, Bailey.  She was 11th place Senior yearling at the 2005 Nationals. (photo courtesy of Waiilatpu Alpines)

Update: Unfortunately we lost Tego in the fall of 2007.  The diagnosis upon necropsy was that the had extensive lymphoma.  I am sorry to say that we did not get him collected as a kid.  Thankfully we have many daughters to carry on his genetics, but he will be sorely missed.

*****************************
Tego has been a terrific cross with our girls, especially on the Baxter daughters.  Two of his young Junior daughters have aready garnered their dry legs. He is a huge yearling buck, scoring an incredible 50 on stature, with the long body and rump of his dam, Mandolay. (E on rump) With the depth of quality in his pedigree, we are expecting great things from him. 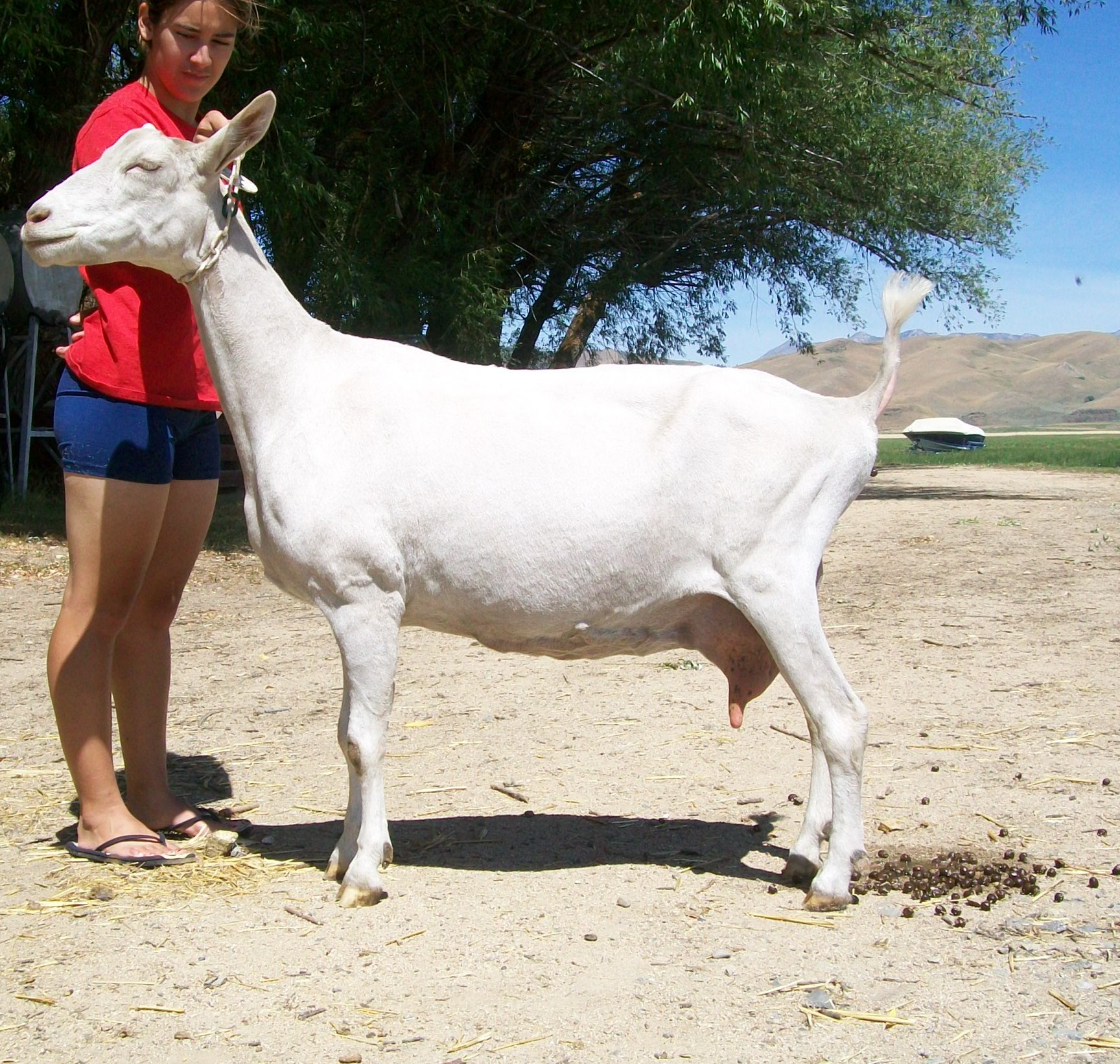 Agatha at 6 yrs old - milked out

Click For ADGA Pedigree
Agatha is nothing less than a queen, both in the herd and in the milk room.  She posted an incredible Top Ten ranking milk record as the youngest doe listed with a record of 1-11 305 4660 204 138.

To top it off, we were thrilled when her 3 yr old appraisal score came in at 90 EEEV!  She scored an impressive 42 in stature, 36 foreudder, 39 rear udder arch, and 34 medial.  She scored an E in front legs, rear legs, and rump.
Her next highlight for 2006 was to garner the coveted SG designation!

Her cream color has always made her a standout.  Some judges love her, some hate her, but she always drew attention!  She was defeated only once as a yearling, and was kept home after that to do what she does best --make milk!  If I had to choose only one doe to keep -- Agatha would be it.

2007- Agatha is again on track to make the Top Ten in production.  Still in progress (she isn't done yet!) 269-4650-169-1282009-Agatha had a really tough kidding with huge triplets in 2008, and ended up with some damage in her pelvic area.  She has never really moved quite the same since, and thus was considered NIC at appraisal time.  We decided to allow her to dry off early this fall since we don't think she has much left to prove!  Her current numbers for 2008 are 247-3370-128-95.Agatha once again made the Top Ten list in 2007!  She came in with a final record of 293-4880-178-135, which was good enough to put her #3 in milk, #2 in butterfat, and #2 in protein.Winter 2009 -
Agatha aborted this year after some serious fighting to retain her queen status (which she did!)   We were unsuccessful in rebreeding her for late kids, so we will try again this season.  Even though she did not freshen, she still managed to put up a respectable lactation projected at #2560!

Agatha has some permanent nerve damage and muscle degeneration on her right hip/leg, and likely will not be in condition to appraise again.  We were pleasantly surprised when we brought her out at appraisal (as required) and the appraiser told us that she would have definitely gotten an "E" mammary!

Update 11/09 - we are fighting a uterine infection on Agatha, but are hoping to get her to settle soon. 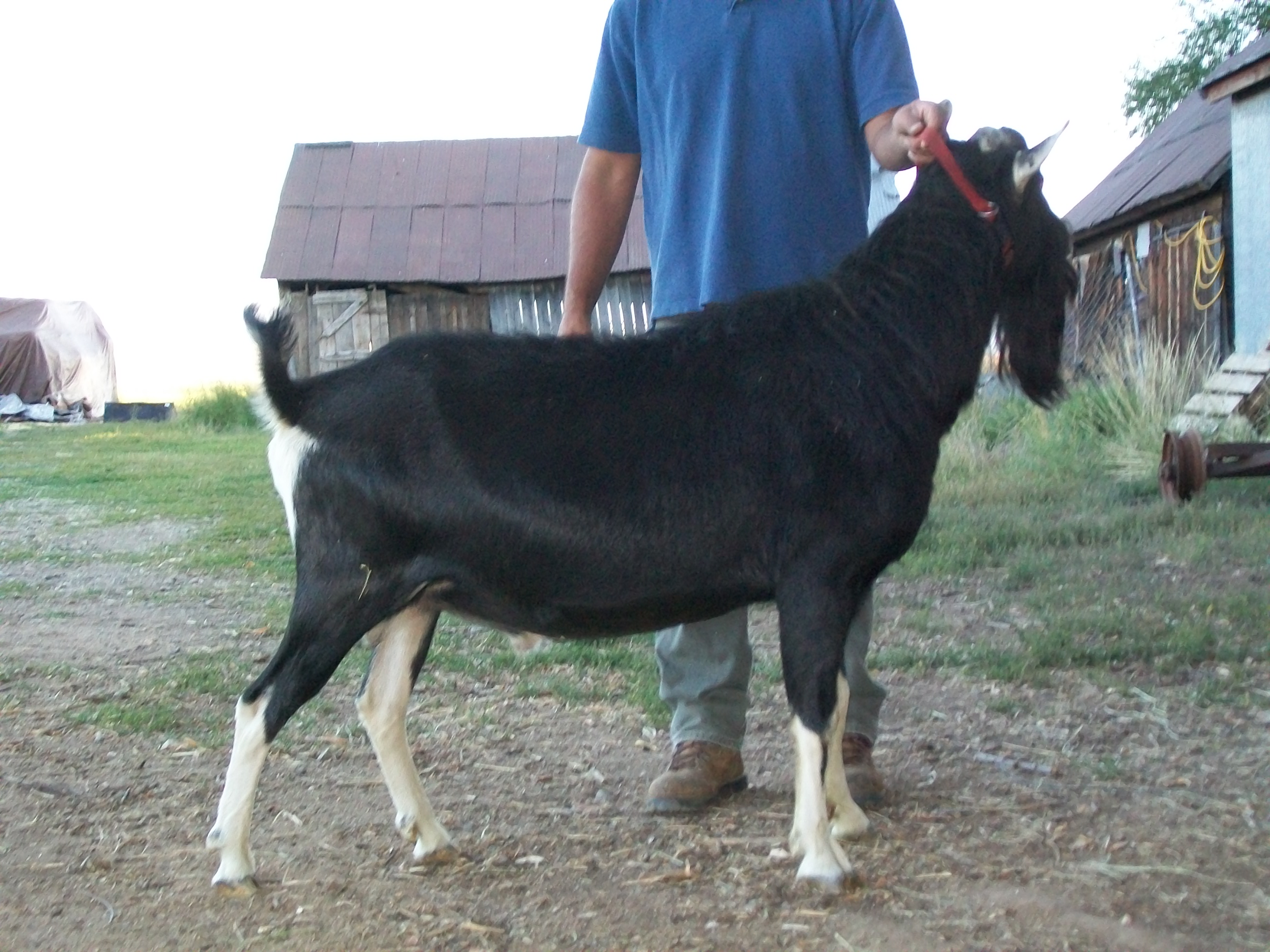 DOB:3-11-2007
American Alpine
YSA: V
LA@1 yr 89 VEV
LA@2 yr 88 VEV
I am very excited with Aragon's addition to our herd!  This should be an incredible cross.  He is sired by the notorious Rainman and out of Pearl Valley Jawhawk Aurora, who bosts an incredible LA score of 93 EEEE  He is listed on the Young Sire Development list with ETAs of 19 and 22.

2009- Aragon's daughters are proving themselves to be some of the nicest in the herd!  He is stamping incredibly cut out escutcheons, and pretty mammaries with teats consistently smaller than their dam's.  His yearling daughter Pensive was 6th place milking yearling at the 2009 nationals! 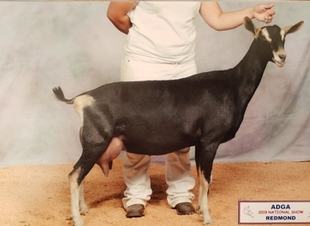 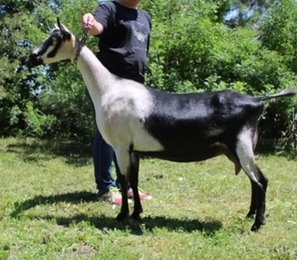 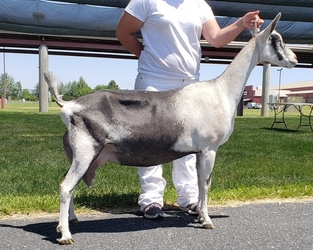 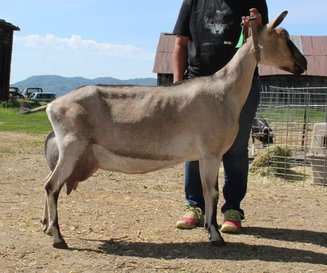 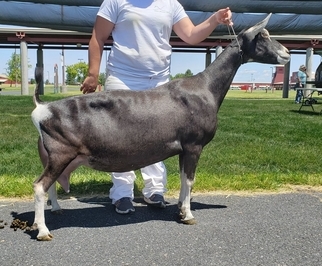 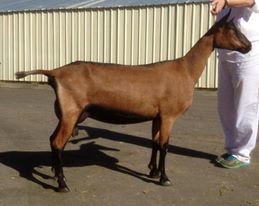